The Parable of the Magnificent Church 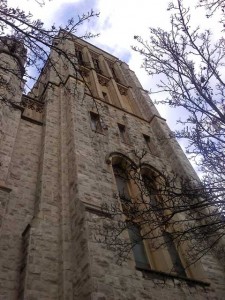 Once upon a time, in the city of Allentown, PA, a huge and magnificent church was dedicated in 1876. Salem Reformed Church was built on the highest point in the city, on Chew Street between 6th and 7th Streets. The cathedral-like church towered over the surrounding buildings and was visible for miles around to all who approached the city. A great bell was cast to hang in its bell tower, calling all around to worship. The sanctuary seated over 700 and the Sunday School auditorium, the largest in the city and indeed in any nearby city, seated 1800.

A huge pipe organ, built by C. F. Durner of Quakertown was installed in 1885. It was powered by a “Little Giant” water motor. The oak pews were sumptuously padded, unusual in the 19th century. The magnificent stained glass windows, including a spectacular rose window, were made by Thomas Aiken & Co. of Philadelphia. 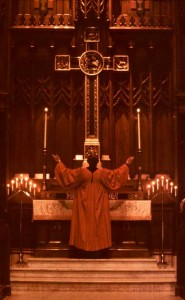 The altar of Salem UCC

After the installation of the organ, the windows, and the bell, a rededication of the building was held in 1885. The Allentown Daily City Item covered the event, reporting every detail of the ceremony of rededication. One paragraph in particular from the article is notable in this area of the country where the German language was still predominant:

From its organization, about ten years ago, Salem Reformed has been a phenomenally successful congregation. While older German congregations of this city have been compelled to introduce English services in order to retain the young people, Salem’s services have always been held in the German language, and the majority of the members are comparatively young people.

However, the pastor, the Rev. Dr. A. J. G. Dubbs, was paying attention to the changes going on around the magnificent building and began introducing English into the services despite opposition from some of the church members. At first, he began conducting the evening services in English, and then gradually over the next ten years nearly all the services were conducted in English.

Fast forward 100 years to the 1970s, and of course there was a magnificent observance of the congregation’s centennial year. Now known as Salem United Church of Christ, the congregation still ministered to some folks in the 7th & Chew area but largely had become what Lyle Schaller called an “Ex-Neighborhood Church.” Downtown Allentown had changed. Many of the factories that had fueled former prosperity had closed, and the social conditions that would be woven into Billy Joel’s famous 1982 song were inexorably under way:

Well we’re living here in Allentown
And they’re closing all the factories down
Out in Bethlehem they’re killing time
Filling out forms, standing in line. 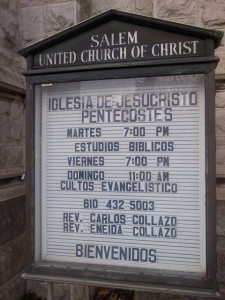 Folks drove in from the suburbs to worship on Sunday morning, less and less connected to the area around the beautiful cathedral-like church. A huge organ endowment had been built over the years, so that each year the organ could be improved – but no such endowment existed for the deteriorating hulk of a boiler that heated the complex and ageing building. The cost of replacing the boiler was substantial enough that consistory members joked bitterly that if the boiler went, they’d have to close the church. By 1980, only a few years after the centennial, attendance had dropped to well under 200, sparse in that vast sanctuary, and most of the building was unused.

The surrounding area became largely Latino over the next decades, and Salem UCC became an English-speaking island in a sea of Spanish. The congregation closed with a final service on Easter, 2007, 131 years after the construction of the building. That magnificent building still stands, its great bell still in the tower; but today a Spanish-speaking Pentecostal congregation worships inside on Sundays.

Let those who have ears to hear, hear. 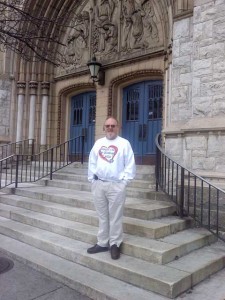 John Jackman on the steps of the former Salem UCC

I served as Youth Pastor at Salem UCC from 1979-1981 while studying at Moravian Theological Seminary. I loved the magnificent building, the gothic sanctuary, and I enjoyed working with the young folks that were associated with the congregation. I left to work as student pastor at East Hills Moravian Church during my last year of seminary.

I lost touch over the years with the folks at Salem, but was not surprised to find that it had closed. The writing was on the wall when I was there. In many ways, Salem UCC is a parable for me, a parable that many traditional churches needed to hear – though I suspect that already for many of them, it is already too late.

One Response to The Parable of the Magnificent Church