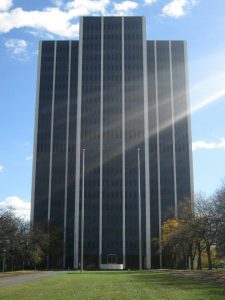 I stopped by Bethlehem last week to have my last look at Martin Tower.  The next time I visit it won’t be there.  As the implosion of the iconic landmark approaches, I thought we should take a moment to look back at the man who it was named after.

I got to know Edmund Martin in 1980 when I married into the family, and knew him the rest of his life.  He was a charming man, a man who loved golf and fishing.  He had a pretty wide streak of temper, but was tremendously loyal to his “people,” the company he spent his life working for, and his community.  His impact on the Lehigh Valley, largely forgotten today, was enormous.

When Ed Martin became President of “the Steel” in 1960, and then also Chairman in 1964, it was clear that the corporation needed a new headquarters.  There was strong pressure from many on the board of directors to move the headquarters to New York City.  But Ed was adamant that Bethlehem Steel should remain headquartered in Bethlehem, a city he had grown to love.  Plans were begun for the construction of a landmark headquarters that would be the tallest building in the Lehigh Valley.  The decades of the 70s and 80s would have been drastically different if Steel had moved its headquarters.  Literally hundreds of executives and their families would have moved out of the Valley, and those rough decades (immortalized in Billy Joel’s song) would have been far more depressing.

Part of keeping the headquarters and administration in Bethlehem was making sure that Bethlehem was a great place to live.  Downtown Bethlehem was not so pretty in those days.  The Moravian Industrial Area along the Monocacy Creek was an ugly automobile junkyard.  Ed and his wife Frances (a tiny but energetic lady better known to friends as “Mighty Mouse”) were instrumental in the efforts for historic preservation and cleaning up the eyesore behind the Hotel Bethlehem.   He was a board member of Historic Bethlehem, served as leader of the Committee for Greater Bethlehem, and was a member of the Bethlehem Area Foundation.

Ed Martin was a CEO of another era, a time when the top brass made perhaps thirty times what a line worker made – not 600 times.  He had worked his way up in the company, starting not quite at the bottom, but in a pretty menial job as a machinist.  He would have viewed the obscene CEO salaries of today as representing disloyalty to the workers and the company.  It’s forgotten today that one of his first actions when taking over as president was to reduce the salaries of the top executives – he actually made more as VP than he did as president.  Many Steel employees called his economies “Martinizing.” 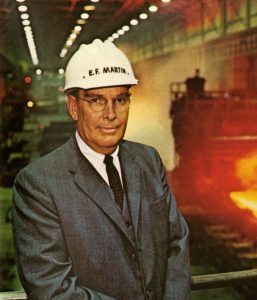 Edmund F. Martin inside the Bethlehem Steel blast furnace in 1964.

In 1963, Lehigh University recognized Ed Martin for “distinguished service to the welfare and progress” of the community; in 1980, Mayor Paul Marcincin honored him as a “community leader who has inspired support for the preservation of Bethlehem’s history.”

In other local involvements, he was a trustee of Lehigh University and St. Luke’s Hospital.  His influence beyond the Lehigh Valley was broad.  He served on the Board of Directors of the Morgan Guaranty Trust Co. of New York; a trustee of the National Safety Council, and the United States Council of the International Chamber of Commerce.  Sweden made him Knight Commander of the Royal Order of the North Star, while Liberia awarded him Grand Band of the Order of the Star of Africa and Brazil recognized him with the order Knight Commander of the Southern Cross.

The plans for the new headquarters were nothing if not ambitious; originally, two towers were envisioned.  Designed by architect Haines Lundberg Waehler, the tower was built by George A. Fuller Construction Co. of New York, the same company that built the Flatiron Building, the CBS Building, and Rockefeller Center.   The innovative “plus sign” design allowed many more executives to have a corner office.   The framework was completed in 1969 and there was a halt in construction for a couple of years.  The building was completed in 1973, when it was named in honor of Ed, who had retired at that point.

After his retirement from Steel in 1970, Ed remained very active in civic affairs.  He died at home in 1993, and did not live to see the bankruptcy and dissolution of the company he had led and loved.

I have followed the meandering tale of what would happen to Martin Tower closely; and while it presented significant challenges, none were insurmountable.  As a current resident of the Winston-Salem, NC area, I have seen several historic structures here that were far more challenging successfully repurposed and preserved.   The Reynolds Building, rife with lead and asbestos and lacking any modern safety features, has been successfully and profitably repurposed as a luxury hotel and condominium.  The unique mid-century design of Martin Tower deserved such attention.

It is a shame that owners Lewis Ronca and Norton Herrick did not have the vision, drive, and determination that Ed Martin showed in saving Bethlehem’s older historic buildings, and then exhibited in building the tower that would bear his name.  Following the implosion on May 19th, Martin Tower will be the dust of history, to be replaced with inconceivably boring vanilla commercial development that could be in a suburb of Dallas or Charlotte or somewhere in Peculiar, Missouri.  Bethlehem will have lost its most visible and recognizable landmark, an iconic architectural achievement which could have served the community for generations to come.