A perfect topic to start this long-postponed blog!

Today is Saint Patrick’s Day and they’ve dumped green dye in the Chicago River, corned beef and cabbage is the planned supper in many homes, and today everyone is Irish!  But few people spare a thought for the real person behind the day, who probably died on March 17, 461 A.D. 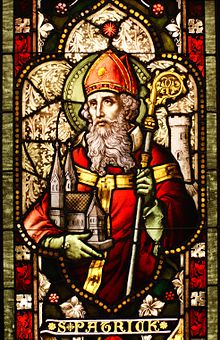 The real Saint Patrick didn’t chase the snakes out (there never were any) and wasn’t actually Irish — he was born in Roman Britain and at age 16 was captured by Celtic pirates to be a slave.  For many years he was a shepherd, and spent a large amount of time alone in the wilderness tending the sheep — and praying.  According to his writings, a voice—which he believed to be God’s—spoke to him in a dream, telling him it was time to leave Ireland.

Patrick walked nearly 200 miles from County Mayo  to the Irish coast, where he found a boatman willing to take him back to Britain. After his escape, Patrick experienced a second revelation—this time a dream telling him to return to Ireland as a missionary — in other words, to voluntarily go and minister among his former captors!  Talk about guts. Patrick began religious training, study that took over 15 years. But after his ordination as a priest, he followed his calling and was sent to Ireland with a dual mission: to minister to Christians already living there and bring the Gospel to the Irish.

What he did is remarkable for several reasons: he used a completely different model than the heirarchical Roman Church had used, and he accomplished his mission entirely without bloodshed — there are no Irish martyrs in this process.  His model was to move into an area and build relationships, talking with the people and ministering to their needs.  He spent time building relationships, especially with the leaders but also with the ordinary people, freely answering their questions about faith — and ultimately asking them to follow Christ as well.  This gentle and non-violent approach contrasted dramatically with the quasi-military approach that Rome had used in many other circumstances:  conquer the land and tell the people what to believe.

There is no doubt that Patrick’s sheer courage won many over:  he faced down the very tribal leader who had previously enslaved him.  Armed only with his faith, he stood against violent Celtic tribes and armed Druids with dramatic defiance — including lighting a forbidden bonfire on Slane hill — that defied logic but won hearts.

Thirteen centuries later, two young men left the village of Herrnhut in Germany to take the Gospel to the slaves of St. Thomas.  Leonard Dober and David Nitschmann probably knew nothing of the details of the story of Patrick, but in a quiet and revolutionary way they followed the same model.  Dober and Nitschmann did not go armed with money and might, but with gentleness, love, and a concept of servantship.  They fully expected that they would have to sell themselves into slavery on the island to have any sort of relationship with the slaves.  That didn’t happen, but it came close.  They lived and worked among the slaves, building relationships, ministering to needs as they arose, caring for the sick.

This work on St. Thomas is generally regarded at the first missionary work to be organized by a Protestant denomination.  It’s very success, and the continued success of Moravian efforts around the world, lay in building relationships, demonstrating compassion, and winning hearts one at a time — much like Saint Patrick so many years before.

Today’s Christian Dominionists, who apparently believe in imposing their version of morality through theocratic laws, could take a lesson from Patrick and from David Nitschmann.  You don’t change hearts through force — either of arms or of law — you win them over by love and service.