Jesus is the Lens

In my last post, I mentioned Dr. Craig Atwood’s comment that for Moravians, “Jesus is the lens,” the lens through which we view and interpret all of the Bible and theology. For us, Jesus is the greatest revelation of the nature of God, and His words, actions, and sacrifice give us a better “window” into the heart of the Maker than any prophecy, any law, any Psalm.

The problem that is posed for the intellectually and spiritually honest person is that the Bibles is a very complex book: the Old Testament spans centuries, changes in culture, and circumstances of the Israelites. It incorporates Hebrew storytelling and verbal tradition, combines inspiring Psalms with tedious genealogies, and places profound visions of the Kingdom of God right next to the gritty violence and destruction of the ancient world.

Frankly, it is not actually possible to interpret every part of the Bible literally and pretend that sections don’t contradict one another. OK, it is apparently quite easy for some people, but they do this through an intellectually dishonest mental gymnastic that I can’t do. They are like the White Queen in Alice in Wonderland:

“Alice laughed: “There’s no use trying,” she said; “one can’t believe impossible things.”
“I daresay you haven’t had much practice,” said the Queen. “When I was younger, I always did it for half an hour a day. Why, sometimes I’ve believed as many as six impossible things before breakfast.”

I believe that God gave use brains for a reason, and He expects us to use them. Believing silly things and pretending that self-contradictory things are compatible isn’t faith, it’s just foolishness. So how do we understand some of the difficult texts in the Old Testament that seem to order violence and cruelty, or which seem devoid of the compassion and mercy and grace so profoundly exhibited in Jesus’ actionas and life?

You can list for yourself some of the “clobber” verses currently being bandied about on hot-button issues. Though we ought to discuss them, they don’t actually serve as good examples for how to have the discussion, because the topics are fraught with such a deep level of emotion and burdened with ponderous baggage. So it’s better to select other problematical passages that aren’t the current “hot buttons” for discussion.

If someone has a stubborn and rebellious son who does not obey his father and mother and will not listen to them when they discipline him, his father and mother shall take hold of him and bring him to the elders at the gate of his town. They shall say to the elders, “This son of ours is stubborn and rebellious. He will not obey us. He is a glutton and a drunkard.” Then all the men of his town are to stone him to death. You must purge the evil from among you. All Israel will hear of it and be afraid.

Now, I think most normal Christians today would have a serious problem with this Mitzvot. You would find agreement among the Taliban and some radical tribal Muslims in certain parts of the world, but I think most Muslims would be horrified at seriously applying this passage, as well.

So here’s the question, using Jesus as the “lens:”

How do we interpret this passage in light of Jesus’ Parable of the Prodigal Son, where he clearly draws a picture of a defiant son, a glutton and a drunkard who gambles away his father’s fortune? Jesus goes to great lengths to make clear that the father receives him back with grace and forgiveness even before the son has a chance to say anything; the father certainly has not been waiting at the edge of town with a bunch of friends with rocks. The parable teaches us of the patience of the Heavenly Father, who waits for us with bountiful compassion rather than stones and condemnation.

How you answer this question is very revealing of how honest you are willing to be about conflicting passages in the Bible, and how much you understand of the grace-filled message of Christ.

How you answer this question is very revealing of just how honest you are willing to be about conflicting passages in the Bible, and how much you understand of the grace-filled message of Christ.

For myself, I answer this question by first acknowledging honestly that there is a conflict between the command in Deuteronomy and the mercy exhibited by Christ. Pretending that there is no conflict here is simply a fib. And in understanding the teachings of Jesus, I simply must side with the “Jesus version” of God rather than the “tribal justice” version represented in the Deuteronomy passage.

So, does this mean that I am simply throwing out Deuteronomy? No. In this case, I may just be realizing that the rule was handed down in a different time, when these were a persecuted tribal people wandering in the desert, and such rules may have been necessary for their time and for the primitive level of spiritual understanding that they had.

When it’s a tossup between a passage in Deuteronomy or Leviticus and the clear teachings of Jesus, I’ll go with the teachings of Jesus every time. I don’t have to have a perfect explanation about why the Deuteronomy passage was necessary, or even if it was what God intended or only what the Israelites understood at the time.

Incidentally, the email correspondent whose initial query prompted these posts thought that there was no problem with applying the Deuteronomy passage literally, and stoning the disobedient son. In fact, he said “I think God is just and His instructions are the most loving way to solve the issue.” Just kill the kid.  A response so utterly devoid of compassion left me breathless and saddened, and it seemed pretty much time to terminate the discussion. However, we should understand that there are folks out there whose view of God is so warped that they truly see no problem here: and this is just the mentality that resulted in the burning of John Hus at the stake. 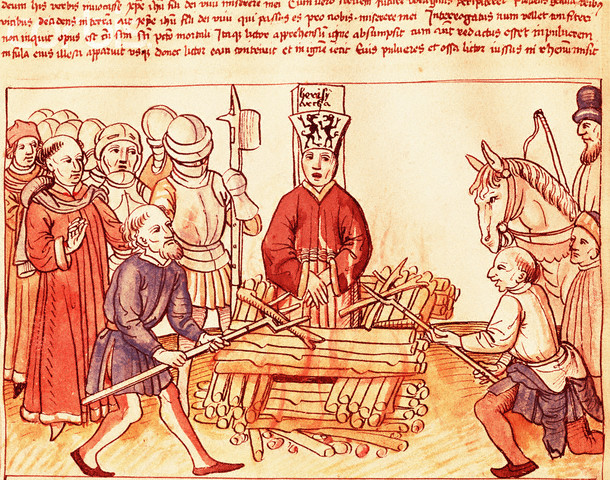 Those of us who come from a tradition of those who were persecuted, whose books were burned, have a problem today with Puritans who are so convinced of their own self-righteousness that they see no problem eliminating the rights of others, or even putting them to death, in the name of their vengeful God. But this is not the God that I meet in Jesus Christ, and I fear that these folks do not understand that they have so inverted good and evil that, like the scribes in Mark 3, say “He has Beelzebul, and by the ruler of the demons he casts out demons.”