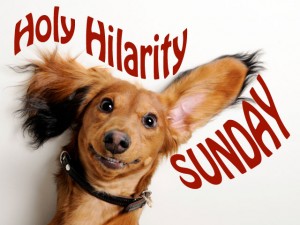 I remember as a child going to the Washington Zoo, and laughing at the monkeys’ antics.  My mother turned to me and said “Anyone who thinks God doesn’t have a sense of humor has never watched monkeys for very long.”  My Dad laughed and said, “Or people, either!”

This coming Sunday we will celebrate “Holy Hilarity” Sunday at my church — a great idea that reaches back to a very old Orthodox tradition of gathering to tell jokes after Easter.  The modern repackaging of the idea comes from Cal Samra, the founder of the Fellowship of Merry Christians, a group that has long promoted the healing spiritual power of laughter.

Sadly, there has always been a segment of the religious world that has been deceived into thinking of God only as a humorless, grim taskmaster, a group that only allows solemn and serious representations of Jesus.  These folks seem to believe in a God that is modeled more on an abusive parent than the God of the Bible!  But this is the Savior who turned water into wine, who made fun of the Pharisees: “You who strain out a gnat and swallow a camel!”  This is the God who named Abraham’s son “Laughter!”

Laughter is good for you, it’s a gift of God.  Scientific research has proved in recent years that a good belly laugh creates all kinds of healthful benefits, affirming the writer of Proverbs: “A joyful heart is good medicine, but a crushed spirit dries up the bones.”  The best laughter, both spiritually and mentally, is when we can laugh at ourselves.  That’s when we can accept our foibles, our human weaknesses and see the funny side of them rather than letting guilt and remorse “dry up our bones.”  I can’t be around humorless people too long, for they seem to suck some of the oxygen out of the air and the Spirit out of life. 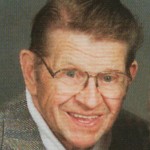 The laughter of bullies, the laughter which seeks to make fun at others’ expense, is not the laughter we’re talking about.  It is the contagious laughter of joy, the rejoicing of a happy heart bubbling forth.  This laughter happens best when we are together, when we are in a group of friends whom we trust and care about – that should tell us something!  We don’t laugh at God, we laugh instead at ourselves when we are foolish and we laugh with joy at the wonderful things that God has given us.  If we take ourselves too seriously, if we take the human side of our institution to seriously, then we are in grave danger of not taking God seriously enough!

One person who loved this tradition was Bruce Harrison.  Bruce showed up every Sunday with a new joke, always and without fail.  He refused to let a stroke destroy his sense of humor or his enjoyment of a good joke.  Or a bad pun, either!  Bruce is one we all miss. 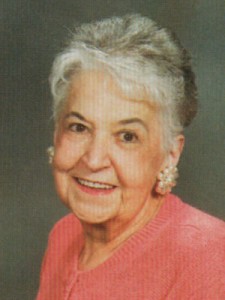 Another whom we miss is Jeanne Carter, who passed into the more immediate presence of the Savior last year.  Jeanne was dying of advanced COPD, struggling for every breath — but still she loved to laugh!  During the last weeks of her life, she had been bedridden in the care of our local hospice.  But she was not going to miss Holy Hilarity Sunday, even if it was the last thing she did.  She called her doctor, and told him in no uncertain terms that he had to make whatever arrangements were needed for her to be at church one last time — and it had to be on Holy Hilarity Sunday.  And when the organ prelude began, (a variation on the Looney Tunes theme) there she was, seated in her regular pew — albeit in pajamas and with her oxygen mask — but she was there, and she enjoyed the bejeebers out of the jokes.  It was the last thing that she was able to do outside of hospice.

I hope you have fond memories of some people like Jeanne and Bruce who have brought laughter and joy into your life.  The best thing we can do in their memory is tell a good joke or a bad pun, and enjoy a belly laugh in their honor!
Listen to the Trinity Moravian Choir’s anthem for Holy Hilarity Sunday 2009 – “In Praise of Coffee!”

I’m usually the guy looking for innovation, rattling the cage, asking why we can’t color outside the lines.  But not this week.  This week I am acutely aware of being the guardian of a tradition, the “keeper of the flame.” 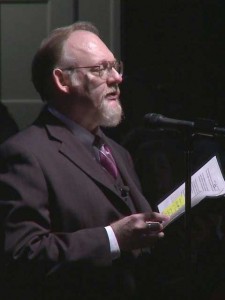 This Sunday, I will again have the great honor and responsibility of leading over 6,000 people in the Moravian Easter Sunrise Service in Salem.  This tradition is older than our nation, older than most Protestant denominations.  This will be the 240th consecutive year that the designated worship leader will emerge from the church in the darkness just before dawn to proclaim to the assembled worshippers, “The Lord is risen!” and hear the thunderous response from thousands of voices joined as one: “The Lord is risen indeed!”

The Easter Sunrise service in Salem is not the oldest; Lititz and Bethlehem were earlier in America and of course the original idea began in 1732 in Herrnhut, Germany.  But it is undoubtedly the largest; it may be the largest Easter sunrise service in the country, and is certainly among the largest in the world.

This is not the time for innovation, but for responsibly carrying forward this great tradition for a new generation.  Sure, we are using new technology to broadcast and record the service.  But the message of the service, substantially unchanged for over two and a half centuries, reflects a timeless hope that reaches over two millennia: “The Lord is risen!”

The 350-piece band that leads the singing of the hymns doesn’t break into creative riffs or solos.  Many of them are talented musicians who play in professional orchestras, musicians with the chops to wow the crowd with their talent.  But on this day, they play the traditional chorales as written, seeking to blend harmoniously with the amateur musicians who have joined them: the grandmother on the French horn, the chemical engineer on the trombone.  Each section of the band, positioned at different corners of Salem, will play a line of a traditional hymn and then wait to hear another section answer back with the next phrase, a sort of 18th century version of surround sound.  There’s no place in the service for fiery oratory, for a sermon.  There’s no spot for a soloist to bring “special music,” because all the music is special.  This is something we all do together, experiential worship at its highest and best.  There is nothing like it in the world. 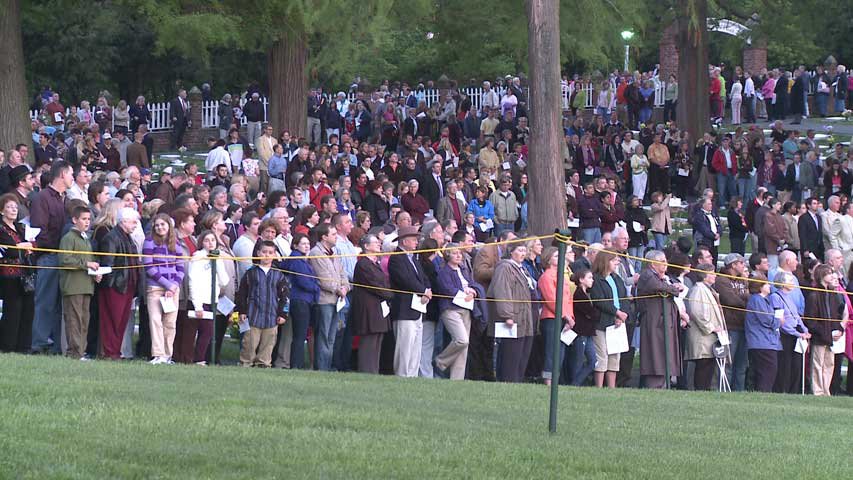 The six thousand or so worshippers will then process in reverent silence, hearing the call-and-response of the bands, listening to the songs of birds intertwined with the music of the brass, aware of the scent of blooming flowers and the dim growing light of dawn.  It will take nearly forty minutes for all the worshippers to assemble in God’s Acre, the Moravian graveyard.  There, thousands of saints who have gone before us sleep; each grave with humble matching stones, each laid flat, each with a simple inscription.  There are no vain monuments to the wealthy and powerful here, no obelisks or weeping angels.  In this place, brothers and sisters in faith are equal in God’s kingdom, and the bank president is buried next to the janitor, the bishop next to the former slave.  Among these gravestones, each carefully scrubbed and decorated with flowers, we will gather to read the Scripture’s promise of resurrection as the sun rises and brings a new day of hope to each of us. 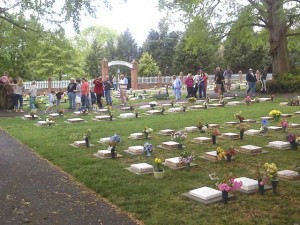 The weeks of planning, the meetings to organize the hundreds of people who work to make this service happen, will all have been worth it.  Sunday morning around 8:00 am I’ll be drinking some strong coffee to keep going for our church’s regular 11 am service, and then after that there will be some very long Sunday naps at our house.  And don’t call me Monday morning, either!

Next year, or the year after that, I’ll turn this honor over to another pastor in Salem Congregation and join the worshippers.   In years to come, I’ll watch with gratitude as the young folks that we have started to groom for different positions of leadership take the baton, lead the ushers, step up to the microphone to proclaim the resurrection.  They will carry on this great tradition.

But this week it’s my honor to do it, like an Olympic runner carrying the flame to the next stage of its journey.  Next week I’ll go back to rattling cages and coloring outside the lines.  This is not the week for that.

If you’d like to learn more about the Moravian Easter Sunrise service, you can read more about it at Duke University’s Faith and Leadership web site:

Vibrant Institutions: The Lord is Risen!